A Lymph Node is not a Tumor

I checked in on Mom at the Meat Counter the other day and saw an interesting new post that reminded me of yet another misconception that “non-meat people” often have.  Let’s begin by reading Mom’s fairly short post (Click Here).  I agree with what she said, however when abscesses get sent into the further processing and retail distribution establishments, there was a kill-floor Inspection failure to rail-out animals harboring localized infections. It’s true that it is often hard for final-rail Inspectors to detect intramuscular lumps caused by punctures as small as medication injection needles.  And, kill-floor Inspectors will quickly cover by blaming high chain-line speeds; which is at least a somewhat reasonable explanation.  However, there is no reasonable expectation for kill-floor Inspectors to catch practically healed infections; that can end up looking like patches of grey sand.  Veterinarians are in charge of all Meat Inspection, including kill-floors, and they train lay Inspectors to look for signs of disease and to rail out “suspect” animals/carcasses for further inspection by a veterinarian.  Incising cranial and mesenteric lymph nods is part of the kill-floor inspection process; to look for TB or other active infections.  But, even when lymph nodes aren’t enlarged or grainy from disease, they are still rather ugly to look at and bitter to the taste.  A lot of lymph nodes make it into sausage and other ground further processed meat items.  Lymph nodes are located throughout an animal’s body to filter blood.  Major lymph nodes, which are left in chilled meat animal carcasses, are located in the jowl (where there’s a lot of them), upper shoulder, flank, along the inside of the chine bone and between the major muscles of the hind leg (round or ham).  It’s up to carcass fabricators and retail meat cutters to remove lymph nodes from seam fat during the final trimming process.  However if you buy a gooseneck round or non-closely trimmed pork shoulder butt, they will both contain a good size lymph node. 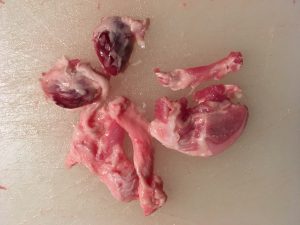 Pictured are three lymph nodes and some bone fragments that I removed from pork shoulder butts. 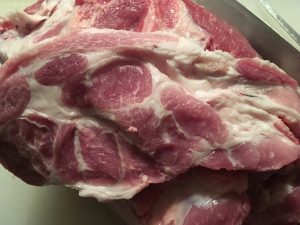 Toward the upper right of the above pork butt you can see a bisected healthy lymph node. 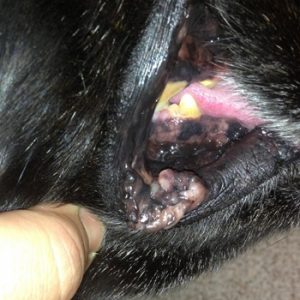 This is an example of cancer in swine.