I recently commented twice on a post in a 140,000 plus member Facebook BBQ group.  Both times that I did my food safety related comments were promptly deleted by a group administrator; presumably because they ran counter to the beliefs of those holding group territorial authority.  During my life I have witnessed the ever increasing growth of convenience food processing and packaging.  I don’t like the approximately 45 year old convenience food trend and speak out against it regularly in blog posts; where I try to counter it with practical home processing techniques.  In the U.S. the backlash against convenience food has taken different forms; with most of such people actually aiming at make money off promoting their versions of old-style home cooking.  The majority of BBQ enthusiasts tout low and slow outdoor cooking, but do not promote cost effective equipment & supplies, or reasonably low labor (time) inputs.  High quality pork enthusiasts bemoan the loss of high-on-the-hog marbled chops, but then go all the way to the extreme of trying to bring back lard type hog breeds.  The main stream market for lard is gone forever, therefore we can’t use up a bunch of lard hog trim fat.  Besides, fat weight is expensive to put on hogs.  High quality beef enthusiasts rediscovered that marbling is good, but then quickly fell in the thinking trap of “if some marbling is good, tons of marbling is better.”  The current dry-aging trend is likely and outgrowth of the older – tougher – stronger flavored grass finished (not grass-fed) beef trend.  But, dry-aging beef wastes product due to dehydration & spoilage, plus can cause the production of potentially harmful biogenetic amines & oxidized fat sustances.  All these supposedly noble meat consuming causes apparently fail to recognize the concept of “optimal;” while swinging from one extreme to the other.   These little complaints of mine are admittedly no big deal, but conversely being ignorant about the unwritten laws of nature can sometimes carry rather harsh consequences. 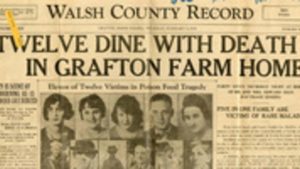 I dislike sensationalistic semi-fake news as much as the next person, and want to assure you that sensationalism is not my intention here.  My use of the above picture is aimed at being an interest approach to hold your attention.  Admittedly, cases of botulism poisoning are very rare.  But, as documented in the newspaper story pictured, food poisoning has happened in the past and is surely to occur again in the future.  My main concern is that the current increased interest in sous-vide and low – slow smoking meat preparations could increase the likelihood of localized botulism cases.

Clostridium Botulinum is an anaerobic bacteria that is common in soil; likely because of the low oxygen, moist and nutrient rich environment often found underground.  When growing (multiplying), C. Bot. produces one of the most potent naturally occurring toxins in the world and that toxin is heat stable to 185F.   A favorable bacterial growth environment includes. moisture, food, a moderated temperature range and a fairly high (low acid) pH.  Nitrite (meat cure) also prevents the vegetative growth of C. Bot.  If conditions are not right for vegetative growth, that bacteria goes into a spore (seed-like) state and waits for the return of a favorable growth environment.  Both bacteria and bacterial spores are very minute so they are easily wind transported in soil dust etc.; where they can end up on fruits & vegetables etc.  Interestingly, many cases of infant botulism have been associated with the affected baby having been in close proximity to construction sites or other areas of soil disturbance.  Infants don’t have much stomach acid so C. Bot. can grow in their low oxygen guts and produce toxin.  It’s commonly recommended to not feed honey to infants.

Most food spoilage bacteria grow in aerobic (high oxygen) environments, therefore vacuum packaging and canning are useful food preservation measures.  If you ever see a puffy vacuum package or a distended can, that’s a good indication that anaerobic bacteria are growing and producing carbon dioxide gas.  In home canned products the rubber seals may leak out any generated gas before the pressure gets high enough to break glass canning jars.  Some anaerobes are putrefactive and produce a very foul odor that’s more than evident when a sealed container is opened, C. Bot. is not a putrefactive anaerobe so there is no smell warning.  The reason low acid canned products are overcooked is because the center of the can was brought up to 250F and held there for almost 3 minutes in order to kill any C. Bot. spores that might have existed in the can.  Home canned, low acid vegetables have been recent history’s most common cause of botulism food poisoning.  C. Bot. will grow and produce toxin while leaving behind very little readily discernable evidence.  There have been cases where a wife tasted a newly opened jar of home canned vegetables prior to cooking.  And, once the product got above 185F for about 5 minutes the C. Bot. toxin was totally deactivated.  The wife got botulism poisoning, but he rest of the family didn’t suffer any symptoms of the toxin.

Circa 1735 an often fatal disease of the human nervous system was recorded as being associated with German sausages and the term botulism was then named after the Latin word for sausage “botulus.”  Meat has plenty of moisture and other nutrients to support bacterial growth.  Lack of refrigeration back then, and oxygen reducing sausage casings, both likely promoted C. Bot growth.  Tenderizing tough meat and/or natural sausage casings at low moist cooking temperatures, plus the lack of oxygen caused by heavy dense smoke, both further facilitate C. Bot’s growth.  Serendipitously, pork shoulder butts etc. normally dwell above 185F internal for quite some time so that collagen gels enough for the meat to be easy to pull/shred.  Nitrate converted to nitrite greatly inhibits C. Bot’s growth; that may well be why nitrite is still commonly known today as “cure.”  It’s still considered a best practice to use cure in all commercially smoked meat items that were never cooked to the 185F C. Bot. toxin deactivating threshold.

Sous vide practitioners seem to rely heavily upon a reverse sear for 5 minutes to deactivate any surface toxin that might have developed during long, low temperature, non acidic, anaerobic, uncured meat cookery.  Just because whole muscle cuts don’t have bacteria inoculated throughout, as do ground meat products, that does not mean that bacteria or toxin cannot absorb into low cooking purge sous vide items.  Currently, sodium phosphate is often pumped into fresh pork cuts; along with water.  Such pumping can introduce bacteria throughout the meat cut, plus sodium phosphate actually makes the meat less acidic (enhances conditions for bacterial growth); with the aim of increasing finished product moisture retention.  A more common harvest plant practice is to pump both poultry and fresh pork cuts with a solution of water, salt and a microbial inhibitor.  The intention is to enhance cooked product moisture retention, and added water weight can help the plant’s bottom line.  Water and salt are officially considered natural ingredients and even though they increase the natural levels of water and salt in pumped products, such fresh cuts are still permitted to be labeled “Natural.”  Added microbial inhibitor is not required to be label listed either and is likely considered a necessary microbial control intervention required due to the pumping process.

How to push your luck with meat borne botulism:   Conduct the following practices in sequence.

Pretend that C. Bot. spores are not everywhere.

Don’t achieve 185F internal in ready to eat, uncured meat items as a means of deactivating the C. Bot. toxin.

One member of the FB BBQ group, that I mentioned at the beginning of this post, told me that he has been low & slow smoke-cooking fresh sausage for years and has not died yet.  He’s right: the chances of contracting botulism are slim, but since you can only die once – one should know all they can about this potentially deadly threat.

10 thoughts on “Botulism in Meat Risks”