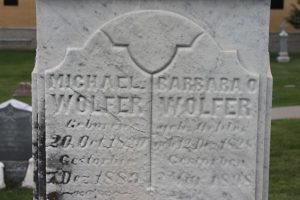 Worldwide, Wolfer is an uncommon surname.  Interestingly, well over a thousand Cincinnati metropolitan area people can trace their ancestral lineage back to one Johannes Michael Wolfer who arrived alone in that particular river city in 1841 at the age of 23; after leaving  Eschbach, Germany.  Michael’s grave marker lists his birth year as 1820, but baptismal records recovered from Germany state that he was born in1818.  We will never know with 100% certainty which date is correct, but I’m opting to go with 1818 for the remainder of this story.

Michael’s wife, Barbara Otilia Oehler, was born in Cincinnati in 1828.  Therefore, I have a verified American born grand parent 5 generations back on my father’s side.  There are no records of how far back my American roots go on my Irish heritage Mother’s side, but we do know that her people came out of  the Appalachian Mountains and I had a living Great Grandma on my Mom’s side until I was 30 years old.  We have 2 different baby’s 5 generation pictures and 14 more of her Great Great Grandchildren can honestly say that they were alive during some of the same time that she was.  The kind of hard to believe things about that Great Grandma of mine are that she only lived to be 96, she smoked non-filter cigarettes from 13 on, she only had one child and that one child (my Grandma) only had one child (my Mom) that reproduced.  But I digress.  Barbara Oehler’s parents emigrated from Ichenheim, Baden, Germany in 1812 to Philadelphia, Pennsylvania.  Then after spending five years there they made their way to Cincinnati.  That was 1817, and the year that The National Road across the Appalachian mountains was completed as far west as Wheeling Virginia (there was no West Virginia yet).  The Oehlers were around 30 years old at the time and I’m assuming that they traveled The National Road to Wheeling then traveled down the Ohio river to Cincinnati.   They were some of the first German Catholics to reside in Cincinnati.  Later, in 1856 Jonh C. Roth married an Oehler (she must have been Barbara Oehler’s  older brother’s daughter) and the following year built a meat packing plant on the site of the original Oehler homestead.  That street off Freeman Avenue, that the Roth meat plant was built on, was named Oehler Street after Roth’s wife’s ties to that location.  Point of interest: There were also later Roth – Wolfer marriages in Cincinnati.  Back in that day people often discriminated on the basis of national origin, religion, color and age.  Consequently, at that time Cincinnati contained a relatively small German – Catholic gene pool. 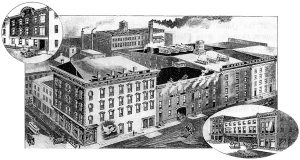 Oehler street was 2 blocks North of Gest street and went to the West off Freeman Avenue.  Today, the location that once was short Oehler street is covered up by I-75; so one of my Great – Great Grandmothers was born just southeast of Cincinnati’s old Union Railroad Terminal.

Some 52 years before Michael Wolfer headed towards Cincinnati, 3 land speculators had purchased 800 acres of wilderness along the Ohio river in an effort to sell lots to settlers.  That tract of land was on the Ohio side across from the mouth of the Licking river and sported a fairly level plateau, to help reduce periodic river flooding risks.  Fledgling Cincinnati was first named Losantiville, which was supposed to mean city at the mouth of the Licking river.   Plots of land there sold slowly for the first several years, and when the U.S, Army suffered a defeat to Indians in 1791 some of the early settlers fled the area.  Fort Washington had been established in 1789 and added both security and economic opportunity to Losantiville.  Early increased economic opportunity there was in the form of both money spent by and on the Army Troops stationed there.  When General Arthur St. Clair was the commander at Fort Washington he changed the name of Losantiville to Cincinnati.  Waterways were the first American highways.  And, inland Cincinnati sat on the Ohio river with the Little Miami to the east, the Great Miami to the West, the Licking to the South; plus in 1845 the Miami – Erie Canal opened to connect Cincinnati with Lake Erie at Toledo.  Ohio’s abundant fertile glaciated land and comparatively close proximity to America’s fast growing East Coast made it an early major provider of food (plant & animal sources), fiber (wool & hemp), shelter (lumber & bricks) and iron for industry.  Southern Ohio’s business environment got even more conducive when river steamboat navigation opened up on the Ohio River in 1811.  Steam boats then made it possible to easily travel upriver; particularly from New Orleans.  The two major dangers of steamboat travel were river bank based Indian attacks and boiler explosions; with the latter being by far the most deadly.  Side note: In America’s worst steamboat boiler explosion 1700 Union Army Troops were retuning home after the end of The Civil War when they got accidently blown-up on the Mississippi River.  Despite many frontier dangers, Cincinnati rapidly became an agricultural commodity hub; where labor (especially skilled labor) was high in demand.

Thing weren’t all that great in Germany during that time.  So as word of economic opportunity continued to spread throughout Europe some of the young and adventurous among them struck out for America; as had been going on for many years.  While doing a little research for this piece, I read that for the most part German emigrants had definite plans of where they were heading to in America and what kind of “in-demand” work they would be qualified to do there.

Cincinnati was pegged as America’s first “Porkopolis” circa 1835.  P&G had started up there in 1837 due to readily available slaughter animal by-products, and fat in particular.   By 1844 there were 26 different meat plants in Cincinnati.  Market animals were herded in from outlying farms and most of the resulting meat was packed in brine barrels in those pre-refrigeration times.  After brining, sealed barrels of meat were river-shipped to many different distant markets.  It was against this backdrop that Michael Wolfer chose to set out alone for Cincinnati in the year 1840.  From primary document – newspaper accounts of his day, even in his youth Michael was already both a skilled farmer and butcher.  Therefore, 1840 Cincinnati, Ohio was definitely a prudent choice of an American destination for him.  Like most young people in their early 20’s, Michael was probably feeling adventurous and invincible as he said goodbye to his birth family for the last time.  I don’t know if Michael ever corresponded in writing with his birth family after leaving home, but I’m highly certain that he was much too busy here in America to ever return to Germany for a visit.  Some of the risks facing Michael on his journey were ship-fever, bad water and/or food, diseases he had no built-up immunity to, ocean weather, steamboat boilers, Indians and by traveling alone he was at an even greater than normal risk of being taken-out by highwaymen.  When he stepped onto American soil at New Orleans in 1840 the people he encountered were speaking English, French and who knows what other languages.  Eschbach, Germany is near the border with France; so he may have been somewhat fluent in the French language.  There are credible accounts of Michael working for 6 months at a New Orleans sawmill prior to continuing on to Cincinnati.  And, I assume that he may have had to work that stretch of time in New Orleans to save up enough funds for steamboat passage to Cincinnati.  One reason why there were sawmills in New Orleans was that some upriver(s) people produced home canned food goods and other exportable items then floated them down stream on flatboats constructed out of hardwood logs.  Everything was then sold in New Orleans and they took a steamboat and/or walked back home.  Upon making it to Cincinnati in 1841 young, strapping, German, Catholic Michael was most likely an attractive “new-blood” commodity in that limited local suitor market.  As planned, Michael immediately found butchery work; then after 5 years he married and established his own butcher shop, both in 1846. 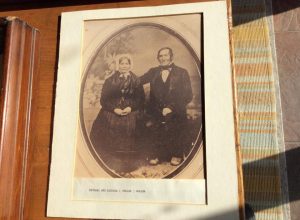 “The only thing for certain is change” and things have worked that way forever.  As the Western United States continued to be developed, Cincinnati began to lose it’s grip on being a major agricultural center.  Chicago, with its Great Lakes shipping and northern railroads was rapidly becoming a bigger meat packing city than Cincinnati.  Then when steamboat traffic was halted on the Mississippi river in 1862, due to the Civil War, Cincinnati lost its Porkopolis crown for good.  Wisely, Michal had sold his butcher shop in 1860, moved out of extremely densely populated Cincinnati (once called a “walking city”) and then took up farming (his other skill) in more rural Delhi Township.  Cincinnati was no longer exporting much meat, but as a growing industrial city there was an increasing number of “town people” that depended on being primarily fed by nearby farmers.  Supply & demand economics were good to local farmers back in those days; before modern food distribution systems.  Produce was grown close to town because some of it is highly perishable/fragile e.g. had to be brought in often; while pork and beef animals could be periodically driven in live from further out in the country.  It’s also conceivable that the Ohio river then acted as an effective barrier to help reduce farm produce price competition from Northern Kentucky.  That’s an advantage that old-time farmers surrounding nearby towns like Dayton and Columbus didn’t have.  The Ohio river formed from glacial runoff when the glaciers stopped proceeding southward; that’s why Kentucky is more hilly and rocky than the western two-thirds of Ohio.  However, distribution networks must have continued to improve because Barney Kroger start out in Cincinnati in 1883 and his company is still going strong today.  Besides “truck farming” (even though farmers were still taking produce to city markets in horse drawn wagons at that time), Michael and Barbara raised 8 children, he was a school supervisor for 13 years, was a long standing Catholic church elder and president of the Turnpike Commission for many years.  Toll turnpikes were once developed to open up outlying regions surrounding cities to agricultural commerce.  Clough Pike was once one such toll road.  Michael bought 4 farms along Clough Pike in Anderson township to setup his 4 oldest sons in farming.  The youngest 2 sons remained as farmers in Delhi Township.  At the time of his death in 1889 the once lone Cincinnati Wolfer had 30 grandchildren; that were living on both the east and west sides of Cincinnati.  By the time his wife Barbara died in 1898 the number of their grandchildren had grown to 43.  Of Barbara’s and Michaels 8 children that survived into adulthood, 6 were boys; so by the turn of the 20th century there were already a good many closely related Wolfers in and around Cincinnati.

If you want to see a listing of just one of Michael and Barbara children’s descendants [5 generations](Click Here).