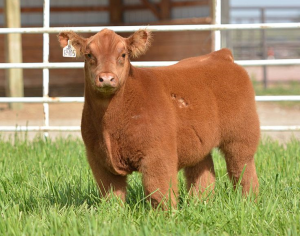 4H club calves sired by AI (artificial insemination) catalog show bulls often fetch top dollar from today’s beef industry interested youth.  Embryos generated from phenotypically appealing cow-bull combinations are sometimes transplanted into normal looking beef brood cows in an effort to obtain evermore winning potential show calves.  I have not heard of it happening, but it seems that transplanting show embryos into some dairy cows would be a good practice because these cows have to freshen each year and dairy type offspring are potentially far less valuable than show calves.  Further, bottle feeding such calves would guarantee extremely docile calves for sale to 4H students, further increasing a calf’s value.  These costly efforts and other extraordinary procedures, such as housing show calves under refrigeration, has something to do with teaching efficient market beef production, right?

4H Breeding heifer beef projects are increasing terminal-cross animals that are too muscled-up to make economical and productive brood cows.  Further, their mongrelized genetics would cause unpredictable feeder calf type outcomes and the ability to exploit the heterosis phenomenon, through controlled cross breeding, is nonexistent.

Like their hog counterpart the barrow, competitive show steers display very heavy muscling.  Athletic looking hogs work OK since about 75% of a market hog carcass is normally further processed (not sold as retail fresh cuts).  Also, everyone seems to be willing to pay plenty for lean bacon.  With hogs a desirable chop (now steak) serving size is not affected because even the diameter of a heavily muscled 300 pound plus market hog loin-eye is small enough to fabricate into acceptable thickness portion control chops.  Moisture enhanced pork baby back ribs now sell for about a dollar per pound more than enhanced boneless pork loins, so about 1/4 inch of loin meat is sometimes left on the ribs in order to create a meatier rib & add weight to the higher priced cut.  Average diameter beef loin-eyes can be cut to make normal thickness steaks (so they don’t rapidly overcook) while still remaining in portion control weight ranges.  Some beef people now advocate lopping larger loin-eyes in half to achieve thick enough portion control steaks, but half a steak is less than aesthetically pleasing.  Eye-appeal is still buy-appeal.

Cattle showing students that grow up to work in the beef industry will sooner or later realize that the old adage about not judging a book by its cover is extremely sound advice.

Fair livestock judges rightly say that they can only place cattle types that are predominately presented to them; lest they won’t continue to land good paying judging gigs.

I don’t think there is an answer to this apparent money-driven anti-intellectualism.  However, it is interesting to observe as it plays out hand in hand with University Education Extension efforts at County and State fairs across the US.

2 thoughts on “Fluffy Cows (playing with your food)”