The word barbecue is thought to have been derived from the Spanish word Barbacoa, from back when the Spaniards first observed Caribbean natives slow cooking meat over open fires on raised wooden platforms.  That trial and error practice added both mild smoke flavor and tenderness to some of their otherwise low eating quality local meat.  The different meat cuts from various carcass regions are… Read More » 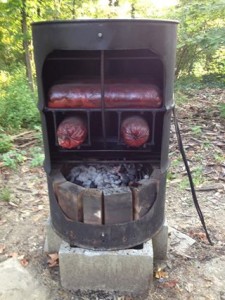 The smoke-cooker pictured here has 5 ten pound chubs in it.  Cook time on the bottom racks was 12 hours; then the shroud was put back in place for another hour in order to get the 3 top chubs sufficiently tender. I have since added some bar between the 2 lower racks to increase the cooking capacity to 60 pounds.

Butt procurement:  A 68 pound case of pork shoulder butts, purchased from a wholesale club store, will yield about 60 pounds of clean butt chunks.  If you receive a heavier catch-weight box, the extra meat can be oven cooked then blended in with the smoke-cooked pulled-pork at the end of the process.  Today, just about all retail fresh pork has been previously pumped (enhanced) with at least water & salt; this needs to be taken into consideration when formulating a marinate.  I’m a strong proponent of adding sodium phosphate to further processed pre-cooked meat items, but since sodium phosphate has already been pumped into some pork one needs to read the label to avoid adding it above recommended levels.  If  starting-raw pork is labeled “Natural” it can contain added water, salt and likely some microbial inhibitors, but will not have sodium phosphate in it.

Before starting to bone-out butts, look and feel for bone fragments where neck bones were separated, where bone-chips may have become embedded in exterior fat on the pork cut fabrication line and from where the blade bone was rapidly saw cut.  Trim off exterior fat to a point where you are almost down to lean.  Fat trimmings can potentially be used to make sausage with another case of butts; 20 to 30% fat in a formulation produces highly palatable sausage.  Much of the fat renders during cooking and is therefore not ingested.  If you go the 2 case route, making both pulled-pork and sausage,  put he “money” muscles from both cases into the 60 pound pulled-pork batch.  Remove blade bones then carefully feel for bone fragments in that area as well.  Blade bones can be boiled to make soup stock for freezer storage.  Seam-off large muscles, removing any thick seam fat as you go.  I try to not leave fat thicker than 1/8 inch in any one place.  Cut boneless butt meat into 2 1/2 to 3 inch cubes.  Don’t worry about generating some small pieces of lean, it all gets shredded in the end.

Marinating lean chunks for 1 to 2 days gets ingredients into where they can react with the meat; also there is no longer any major fat barriers to hinder marinate absorption.  Suggested marinate ingredients for 60 pounds of meat added in order:  2 cups of water, 4 Tbsp. sodium phosphate (only if not already in starting butts), 8 cups beer, 25 cloves crushed garlic, 3 Tbsp.  crushed rosemary, 4 1/2 Tbsp. coarse ground black pepper and 7 Tbsp. purified salt.  Turn meat chunks, using a wooden spoon, a few times during the marinating period to promote equal absorption into meat.

Turn 6 large (bologna chub size) fibrous casings inside out and soak in a strong vinegar-water solution for 30 minutes prior to stuffing them with meat.  Turn casings back to right side out then tie one end of each of them closed using pieces of cotton butcher’s twine.  Tightly hand-stuff meat into casings then tie the remaining open ends closed.   Place stuffed chubs on smoke-cooker racks.

Partially light 3 charcoal chimneys full of hardwood chunks then dump them on cooker’s fire grate.  Putting 4 or 5 charcoal briquettes on the floor of the charcoal chimney under hardwood chunks helps out a lot.  Use the coal flicker to keep loads of partially lit hardwood spread out on the fire grate so they do not flare up before the cooker’s shroud is put in place.  Close cooker then immediately light a full charcoal chimney of briquettes, let this load burn until the briquettes on the bottom half of the chimney are fully lit (all grey on the outside).  Add the partially lit charcoal down the fuel/flue pipe, 10 to 12 at a time, then flick them onto the forward sloping fire grate using the coal flicker down the pipe.  Cooker will then come up to the desired 220F cooking temperature range fairly quickly.  I can judge 220F by being able to hold my hand on top of the drum for 3 seconds, but there are magnet covered holes in the shroud to insert thermometer probes.

Throughout the duration of the cooking time the smoke cooker will need to be tended on an average of every 2 hours.  Add water down the copper tube until the cast iron boil-off pan overflows, sending fly ash out the flue/fuel pipe.  Whenever cooker’s temperature drops to 220F, light 2/3’s of a charcoal lighting chimney.  When charcoal briquettes are about half lit drop them down the flue/fuel pipe 10 to 12 at a time.  Added hot charcoal both increases heat and keep the hardwood chunks smoldering.

Open cooker after 12 hours and check the internal temperature of the chubs on the bottom rack.  I like it to be about 180F.  You can also squeeze meat through casings to feel for desired tenderness.  The top rack will take about an hour longer to reach temp.  Sometimes I’ll pull the chubs on both levels at the same time.  When I do that the meat from the top rack is harder to pull apart, but it also retains more moisture.  Blending the 2 different degrees of doneness, and the protein-skin exteriors of the chub, make for good textural differences in the finished pulled-pork.  I have tried resting chubs, but the meat chunks get harder to pull apart if they cool too much.  If I can ever afford a table-top bowl-chopper I would like to try cooking butt chubs to the high 170’s F then lightly chopping them after they cool to around room temperature.