My brother recently had a fairly young sow harvested at a nearby custom Plant.  He picked up the 409 pound chilled carcass in 30 degree weather on Friday December 2nd.  An average skin-on, head-off dressing percentage for a market hog is 70%.  Since this was a skinned sow and some of the subcutaneous fat was left on the hide, I’m estimating a 65% dressing percentage.  A 65% dressing percentage would put the sow’s live weight around 626 pounds.  Big sows are prized for sausage patty production due to a somewhat crumbly finished product texture.  Bob Evans, Jimmy Dean, Webber and others have done well marketing whole-hog pork sausage in retail chubs; made from culled sows.  Sow meat is also well suited for precooked sausage production because that meat, in common commercial fat percentages, does not readily pack & bind too tightly when ran through mass production patty forming machines.  Hot-boned, pre-rigor sow meat offers other advantages for fresh sausage production such as increased water holding capacity and longer shelf life.  Meat from intact male hogs (boars) normally has an offensive “sex” odor and must be substantially diluted throughout other pork trimmings when used in sausage.  Barrows (castrated young male hogs) and gilts (young female hogs) are normally harvested as market animals at around 6 months of age.  Shoulders and trimmings from other market hog cuts are commonly used in sausage formulations.  About 75% of the average market hog carcass is further processed; not sold as fresh meat cuts.  Our intention with this sow carcass was to make a variety of sausage types & style to giveaway to family and friends. 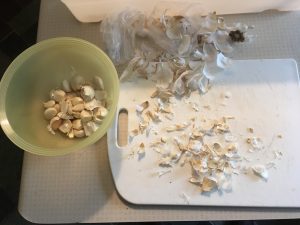 Before leaving home to bone-out the sow carcass, on Friday after work, I started putting together seasoning for 60 pounds of fresh Polish sausage.  Here, the ends were cut off garlic cloves then placed I a bowl.  Next, a lid was put on and the bowl was shaken hard in order to easily remove the tough clove skins. 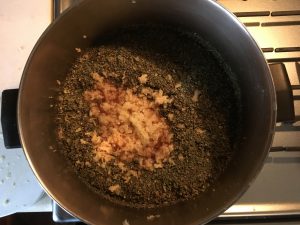 Coarse ground black pepper, leaf marjoram, water and crushed garlic were boiled together then chilled overnight.  Purified salt was stirred in the next morning to complete the seasoning mixture.  Boiling takes the edge garlic, knocks down bacteria in bulk spices and blends flavors.  Seasoning for a 60 pound meat batch:  17 1/4 Tbsp. leaf marjoram, 8 3/4 Tbsp. coarse ground black pepper, 36 garlic cloves, 11 cups of water and 27 Tbsp. of purified salt.  I would have added the recommended amount of sausage sodium phosphate if I had had it on hand.   I have since ordered more; along with a hank of 35 – 38 mm hog casings  for my annual Holiday sausage making where I start out with plant, retail trimmed “natural” bone-in butts.  Since such retail intended butts have been plant pumped with salt-water, I cut those two ingredient amounts in half from what is listed above. 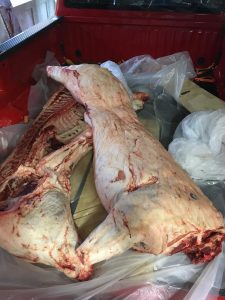 This is what I uncovered in the bed of my brother’s full size pickup truck.  As you can see, it was a clean/professional dress job. 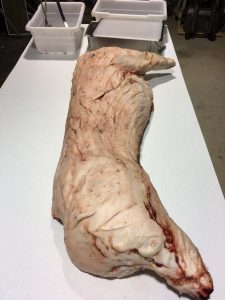 One side laid out on a 4′ X 8′ sheet of FRP (Fiber Reinforced Plastic).  Prior to boning, external fat was lightly trimmed-down using a 12″ knife.  That trimming was to help remove unseen surface contamination and to reduce the end product fat percentage.  Hams were separated using a hand meat saw.  Front leg bones are not attached to the remainder of the skeleton; so are easily remove for boning.  The remainder of the carcass was boned without the need for any more sawing.  That method made it easy to keep track of bones.  A patella (kneecap) on one ham was the only bone or bone fragment that almost got past me.  There was not any bone or bone-like material found on grinder blades after grinding was completed.  We also made an effort to locate and remove lymph nodes.  Bruising and blood clots were very minimal on this carcass, but it is important to remove them so they are not spread throughout finished sausage products. 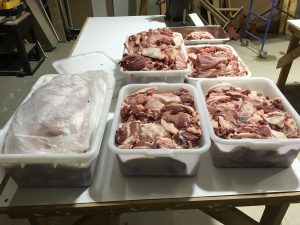 Striped-up pork for grinding.  An effort was made to distribute different carcass regions somewhat equally among the lugs & totes.  The covered lug on left contained both the fat and lean components for fresh Polish, an estimated 60 to 65 pounds total weight. 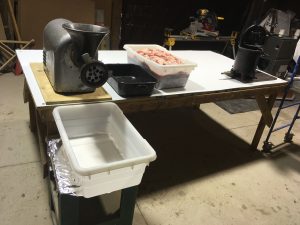 Grinder set up with 3/4 inch hole size plate to grind lean component through once for fresh Polish sausage. 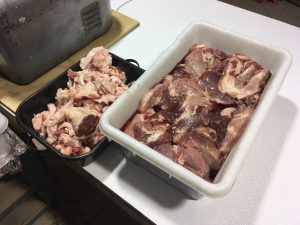 Fat component on top of lug was transferred into a roasting pan to get down to lean.  Due to excess connective tissue, shank meat was ground through a 3/16 inch plate along with fat. 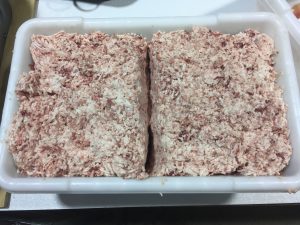 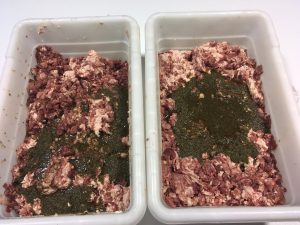 Pork in one half of the preceding lug was transferred into another, nearly equal amounts of the Polish seasoning mixture was poured on top of each one, then hand fisting/mixing began.  Ground pork was used to wipe out the spice containing pot. 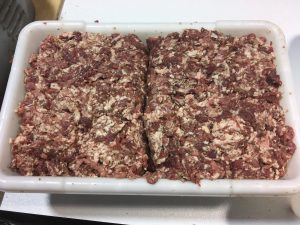 The batch was thrown back and forth as mixing went along; a center line was used a few more times for transferring half the batch into another lug for better blending.  After spice looked well distributed and sausage became somewhat sticky, the entire batch went back into one lug; ready for stuffing. 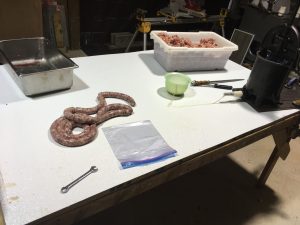 Since I was already grinding at that point in time we moved on to grinding the remainder of the pork before the start of Polish sausage stuffing.  An effort was made to mix fat and lean while all the rest of the pork was ran once through the 3/16 plate; then I set it all side for batching.  Upon completion of grinding the grinder head was taken apart and cleaned immediately by my brother.   Someone left a wrench on the table by the grinder motor; as I started stuffing long Polish links.  The one gallon bag seen here was used to measure link length.  Casing ends were tied on both ends of six long link chains then those 6 went into a gallon bag and were rolled to exclude as much air as practical.  Two rolled and sealed bags of 6 links then went into another gallon bag to accomplish a double freezer wrap. 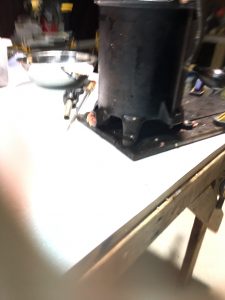 While I worked up the fresh Polish sausage my brother started scaling and blending various 25 pound sausage batches, using pre-blended spice mixtures.  Spices were dissolved in cold water before being added to batches.  This pic shows the stuffing horn removed from the stuffer for bulk sausage chub filling. 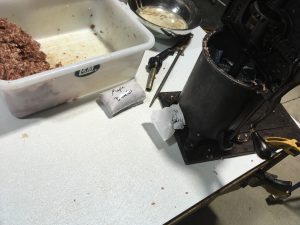 Here is a tube pulled on to the stuffer spout for filling.  The stuffer was clamped to the table enabling all stuffing to be done by one person.  I cranked with one hand and worked the stuffer outlet with the other. 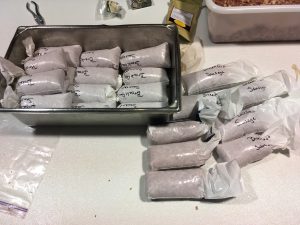 Pre-marked bags were twisted tightly then sealed using hog-ring clips.  See the clipping tool in the upper left of this pic.  It is actually bigger that it appears there.  Excess plastic was trimmed off chubs prior to freezer storage. 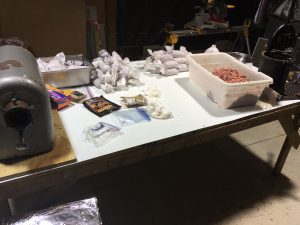 Workshop temps held in the upper 30F range all day so we kept cranking.  Everything went through the stuffer. 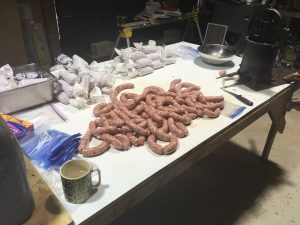 Some linked varieties were linked, cut apart, then packed either 4 or 5 per bag. 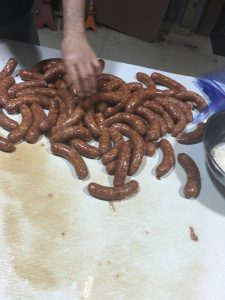 Sausages were pretty much stuffed in order of spiciness; with the handful of sausage from each batch’s stuffer cleanout being mixed into the next variety. 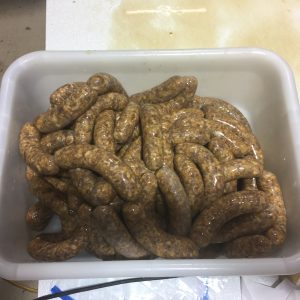 The very last 25 pound batch was cured Andouille.  Use pink salt/Prague powder #1 at a rate of 1 level teaspoon per 5 pounds of meat.  Cure was dissolved in water before adding it to the batch.  Good separation was maintained from the Andouille and fresh sausages so no unintentional curing and product darkening took place. 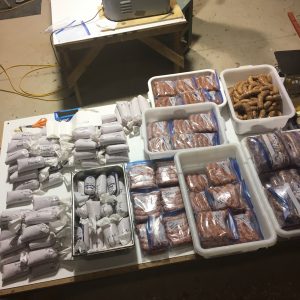 One view of all but about 25 pounds of the Saturday’s work.  Some of the 307 pounds of product had already been given away by the time we wrapped up production. 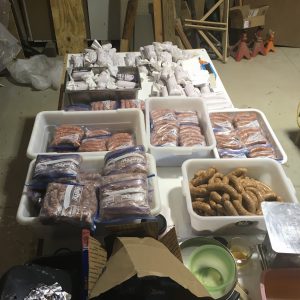 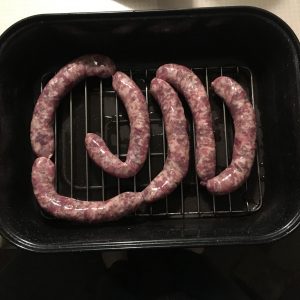 I steam cooked this fresh Polish on a rack & covered, in a 212F oven for 1 hour and 45 minutes, then browned it for about 10 minutes under the oven broiler. 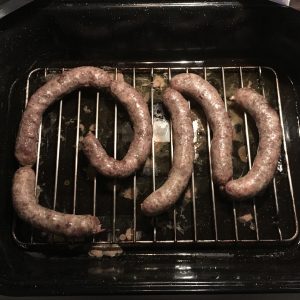 This coarse ground sow sausage was drier and tougher than my normal coarse ground Polish made from market hog butts.  However, the casings were tender.  During boning, the loin and some other carcass regions appeared to be abnormally light colored for a mature sow (myoglobin content of lean increases with animal age).  I also noticed some iridescence when crosscutting the loin-eyes into grinder size chunks.   And, when grinding I noticed a good bit of purge in bottom of the boneless meat lugs as they were emptied.  Putting everything together, I decided that my brother’s sow carcass displayed some PSE (Pale Soft and Exudative) characteristics.  At that point I wished I had purchased sausage sodium phosphate to increase the pH of the meat.  The main benefits of using sodium phosphate are increasing finished product moisture retention and inhibiting warmed-over-flavor (WOF), which is the result of rapid fat oxidation.  I cooked another 6 long links covered at 170F for 3 1/2 hours and got much more palatable end results.  The trick was gelling the mature animal’s collagen (collagen cross-linking increases with age) while not rendering too much fat and dehydrating the coarse ground pork. 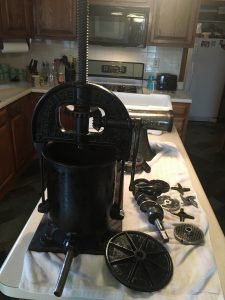 Equipment was re-cleaned well and mineral oiled on Sunday. 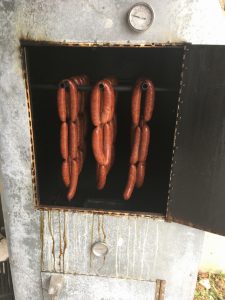 Andouille was smoked at low temps for just under 4 hours on Sunday.  My brother fabricated this smoker using an old metal livestock watering trough as the frame. 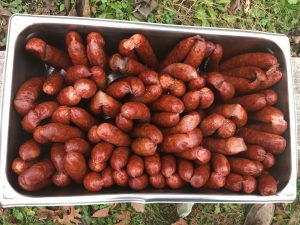 Andouille was at 100F internal in the smoker when it was put down in a deep steam table pan and tightly covered.  The pan was immediately placed in a 210F oven for just over 2 hours to achieve a 155F internal temp.  After the end of cooking links went right into a cold water bath for 10 minutes to prevent casings from wrinkling. 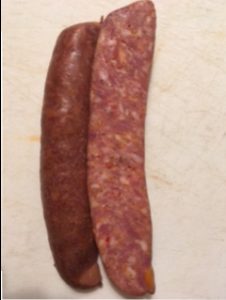 This is a sample of the finished, chilled smoked sausage.  Casings were acceptably tender, texture was good and flavor was great.

Even though other linked sausages, other than Polish, were fairly fine ground, they still become somewhat dry when oven cooked at anything above very low temperatures.  Fine ground patties from bulk were very good when fried up at high heat.  This sow’s meat seems to want to be cooked either hot and fast or low and slow in order to achieve good palatability characteristics.   However, hot and fast is not an option with the Polish due to the coarse chunks of lean that need to be tenderized by moist-heat cookery.  Another option with the fine ground links is to strip the meat from casings; either before cooking to use as bulk or after fast cooking – since casings may then remain tough.

Any input to help us make  improvements on this type of home processing would be greatly appreciated.